The 1st meeting of Apex Monitoring Authority for National Industrial Corridor Development Programme (NICDP) was held today held in Delhi. The meeting was chaired by Hon’ble Finance Minister Smt. Nirmala Sitharaman along with Hon’ble Minister of Commerce and Industry, Sh. Piyush Goyal and Minister of Railways, Communications and Electronics & Information Technology, Sh. Ashwini Vaishnaw in New Delhi. The Meeting was attended by 6 Chief Ministers and Industries Ministers of the States from which the Industrial Corridor is passing through Video Conference. Hon’ble Industries Minister Shri Bikram Singh Thakur participated in the meeting, representing on the behalf of Hon’ble Chief Minister of Himachal Pradesh.

Hon’ble Chief Minister, Sh. Jai Ram Thakur expressed his gratitude to the Government for selecting BBN ‘Node’ in Himachal Pradesh amongst 32 nodes, that have been identified for development in 11 industrial corridors in the Bhartmala Project. He also appreciated NICDC for fast paced activities in development of BBN ‘Node’. The Director of Industries, Sh. R.K. Prajapati also attended today’s meeting. 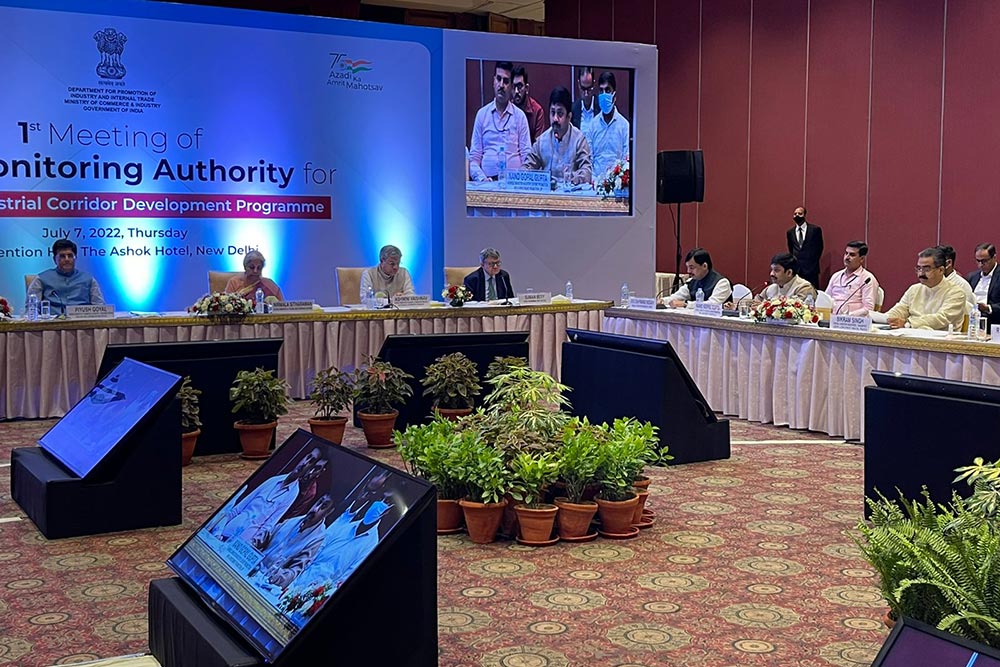 Hon’ble Industries Minister Shri Bikram Singh Thakur thanked Hon’ble Prime Minister for his benevolence for the State on behalf of the people of the State. He also expressed gratitude to the dignitaries present in the meeting for their proactive and positive approach to infrastructure projects of the State. Further, he apprised the panellists the development/ progress made in the BBN Node completion of ground survey and identification for five Integrated Manufacturing Clusters (IMC) in BBN Area with a land parcel of more than 1000 acres. He shared that the Special Purpose Vehicle (SPV), a joint venture between the State Government and NICDC is being formulated and the master plan for the trunking infrastructure has been prepared by the professional agency hired by NICDC. He apprised that in the BBN Area projects of ‘National Importance’ have been grounded such as Medical Devices Park (300 acres), Defence Park (800 acres).

During his presentation on the State ‘s planning on industrial planning, Hon’ble Industry Minister, emphasised that the Una district, which is just 80 km from BBN Area, has a potential of becoming another industrially developed district of the State. He apprised them the district is it well connected with excellent road as well rail network. He informed that the State Government has already proposed Bulk Drug Park and EV Park in the district. The district has State’s 1st Food Park and seven developed industrial areas, Further, there are few upcoming Industrial Areas in the district with a total land parcel of around 2000 acres. Keeping in view of these development he requested to include Una under AKIC project that will provide much desired impetus to the industrial development not only in Una district but also will provide economic boost to the neighbouring districts that constitute almost 50% of State’s population.

Director of Industries said, “The State Government is quite optimistic that the case for considering Una as part of the AKIC corridor.” He further shared that NICDC team was appreciative about the State’s representation for Una and were positive on the same.